We are honored to have Coach Mike Candrea as our keynote speaker during the Feast & Fairways Gala Dinner. Coach Candrea is an exceptional leader in our community. The fact that he has led Arizona to eight national championships, more than any coach in NCAA Softball history, says it all, but there’s more! 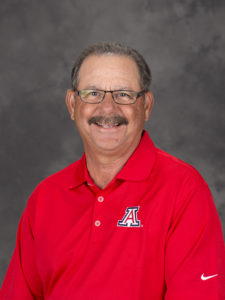 Mike Candrea completed his 34th season as the head coach of the University of Arizona softball team in 2019 and under his guidance reaching the pinnacle should once again underscore a record of success almost unparalleled by any program in any sport at any level.

Candrea is one of the most respected coaches in the nation, with the accomplishments to supplement: eight national titles in a 17-season span, 23 trips to the Women’s College World Series in the last 32 seasons, more than 1,600 career victories, a mind-boggling career winning percentage of 79%, 53 All-Americans with a staggering 104 citations, four national players of the year and stewardship of Team USA to an Olympic gold medal, to name a few.

Candrea earned the 1,600th victory of his career against Stanford on April 19, 2019. Like many milestones before this, Candrea was the fastest coach in NCAA history to 1,600 wins. Candrea’s 1,611 career victories are second most in NCAA softball history. While others on the list have spent time at lower divisions, each of Candrea’s victories occurred at Arizona, making him the winningest coach in NCAA Division I Softball history. Only four coaches in any sport have more Division I victories than Candrea.

The aforementioned gold medal came with his stint as the head coach of Team USA in 2004. His second Olympic squad took home the silver in 2008. Softball was then put on a hiatus from the Olympics, but Candrea’s work in the sport’s final two Olympic years prior to being reinstated for 2020 will not soon be forgotten. Under his tutelage in 2004, the team posted a perfect 9-0 record, outscoring its opponents 51-1 on its way to a gold medal in one of the most dominant team performances in any sport in Olympic history. In 2008, the team came just short of winning its fourth consecutive gold medal.